Cruiser dash cam video of a Lakewood, Ohio police chase involving a 2004 Chevy Cavalier. The police had just called the chase off when the evading driver crashed his car.

The 24-year-old driver was convicted in Lakewood Municipal Court for operating a motor vehicle under the influence of alcohol or drugs.

But hey, at least he usied his turn signals… 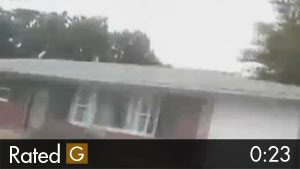