Authorities say Benjamin Royal Pillard, 21, of Woods Cross led Utah Highway Patrol officers on a high-speed chase through three counties. He has been booked into Weber County Jail on:

UHP troopers initially attempted to stop a black Jaguar on US 89 in Davis County. The pursuit continued on I-15 into Box Elder and Weber counties.

Cpl. Todd Johnson of the Utah Highway Patrol said that the Jaguar swerved and tried to hit troopers twice during the chase.

The suspect tossed items (including backpacks) from the window of the vehicle. Police retrieved the backpacks they believe were tossed from the vehicle, but found nothing of interest.

The UHP trooper who collided with the suspect’s vehicle was treated at McKay-Dee Hospital for minor injuries. Ben Pillard was not hurt in the accident, said Johnson. 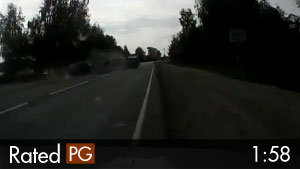