Two hijackers in a stolen car decide not to immediately pull over for the South African police car behind them. The cops don’t screw around over there apparently as they start firing upon the vehicle while driving. Both of the thieves were injured in the resulting accident, but survived.

Dash cam video of police cruiser shows a suspect fighting a police officer, stealing the officer's cruiser, then crashing the stolen car into a landscaping truck at a high rate of speed. According to the Summervill...

Dashcam video of a pursuit in Dallas, TX that turns frightening. Video shows a DPD officer catching up to an ongoing pursuit, to find the suspect backing up an on-ramp in order to exit Central Expressway (highway 75) ... 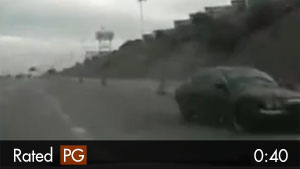 Responding to an emergency, Davenport police department cruiser causes another cruiser to crash into a streetlight pole at the intersection of Locust and Gaines, Davenport IA 52804. Video released by DPD on 10/9/09. ...

Police dash camera catches a commercial semi-truck crashing through the highway divider into the oncoming lanes.  Fortunately, no one was hurt.