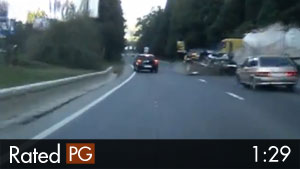 Stupid driver in a black Mercedes SUV speeds around cars, and gets what's coming to him. He ends up crashing into the back of a stopped flatbed truck, banging himself up pretty bad.